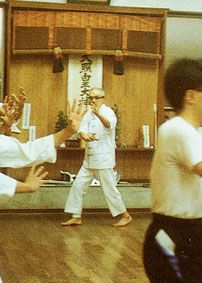 There seems to be a resurgence of interest in traditionalmartial arts recently, something I think is a very good trend. Vicissitudesaccompany the change of ages. As in the words of the I Ching, heat andcold come and pass, engendering the four seasons. But though the seasonschange perpetually, the years remain constant. I have always soughtthat which does not change with the seasons, that which is constantin the midst of constant flux. In this pursuit, I have expanded my studiesfrom Jujustu, to Chinese martial arts, to chin-na, to pressure points,to chi-gung, and finally to Taoism. Anybody can learn to combine thetechniques of reversals, throws, locks, thrusts, and kicks. The integrationof my jujustu with chi-na and other martial arts is slowly coming tofruition, and its completion as a method for bare-handed fighting orwith weapons is near. The greatest truth about Eastern martial artsis that they transcend mere methods for battle to become paths for knowledgeof the world and oneself. Jujutsu and Chinese martial arts make up thepath that I have pursued and that have guided my life.
(from Yawara to Ken to Michi, by Sato Kinbei)

Sato Kinbei is proficient in and licensed to teach the followingarts: